2020 – EU-Rally with our friends from Denmark 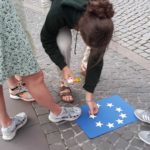 On the 16th of September we welcomed 30 young guests from Denmark! Originally they had their last big trip before finishing school scheduled in April, with New York as their destination. Corona came and changed everyone’s plans …

Bremen instead of New York! It’s not the big apple, but it’s where the Weser makes a big curve.

Together with young locals the Danish students explored Bremen from a European perspective and discovered the ubiquity of the EU in the city center. To what extent does Europe have a direct impact on Bremen and its inhabitants? What has Europe to do with our IBAN numbers? Where is the Danish consulate in Bremen? What are the topics of young people in Bremen?

At the end all four rally groups collected enough stars to create the flag of the EU – some classical, some very creative! „Tak skal du have“ for visiting us – we hope to meet again in the near future. Maybe next time in Denmark? 🙂